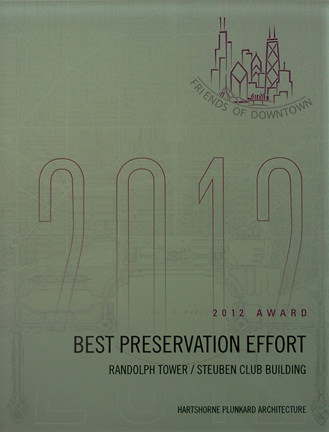 Friends of Downtown, a civic advocacy organization, awarded Randolph Tower with its Best Preservation Effort Award of 2012 at an awards ceremony held on May 29th at The Cliff Dwellers. For over 20 years, Friends of Downtown has honored people, places organizations and initiatives that utilize intelligent planning and urban design in order to make downtown Chicago one of the world’s most unique places.

James Plunkard accepted the award on behalf of the project team, saying, “Randolph Tower was 13 years in the planning and making of this reborn historic skyscraper.  It was a massive, public and private collaboration, and we are grateful to have been part of the effort to revitalize this significant landmark.”

Originally constructed in 1929 as the Steuben Club Building, this 45-story Gothic revival structure, recognizable for its terra cotta clad exterior, was designated as a Chicago Landmark in 2006.  In 2007, Randolph Tower was added to the National Register of Historic Places. Interior and exterior renovation of the existing retail, office and club spaces began in 2011, with completion of the conversion to 313 apartments in 2012.