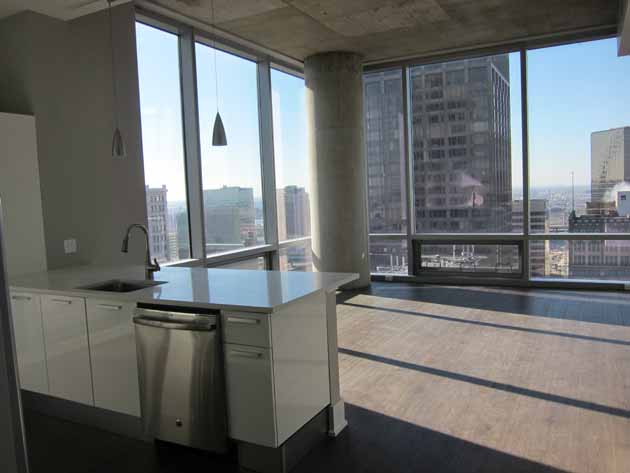 Interior construction is nearly complete at the Tower at ŌPOP, the first new residential high-rise to be built in downtown St. Louis in four decades.

The 25-story high-rise at 411 N. 8th Street was conceived as luxury condominiums by the project’s original developer. The building shell was completed in 2010 but the units remained unfinished due to poor market conditions. Except for a ground-floor restaurant that operated for a short time, the building sat vacant for four years.

The $22 million interior build-out called for the HPA design team to create 128 apartments within the contemporary glass and concrete structure. The urban design aesthetic is underscored by a sophisticated gray palette warmed by wood accents. In-unit finishes include Aran Cucine cabinetry, quartz countertops and wide-plank flooring.

Amenities include a fitness room, conference center, club room and a special-event space with a view of the iconic St. Louis Arch.

Construction began in Summer 2013, with anticipated occupancy in May 2014.